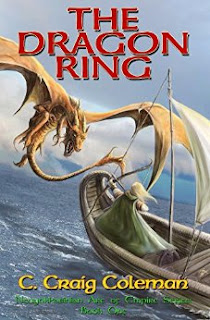 The Dragon Ring is the first book in the Neuyokkasinian Arc of Empire written by C. Craig Coleman.

When the nobility forces the corrupt King Minnabec III to abdicate, his sister assumes the throne. The sudden loss of status enrages the former queen who resorts to witchcraft under a ruthless warlock. She schemes to exact revenge on the royal family by attempting to take the life of the crown prince.

However, when Prince Saxthor, second son and spare heir, displays a special ability, the witch turns to him putting his life in danger. In order to keep the prince safe, the Court Wizard, Memlatec, plans for his escape. With only his best friend, Bodrin, and an assistant wizard for company, Saxthor set on a quest that would prove him to be the only hope not just of his family but the entire kingdom.

I love this story. It is fast-paced and every chapter is filled with adventure and suspense, no dull moments at all. It actually reminds me of Lord of the Rings but a little bit lighter and, probably, a little bit funnier, what with Saxthor and Bodrin always fooling around each other. The writing style is casual and conversational making the book easy to read and difficult to put down. The characters are mostly endearing especially Saxthor, the smart, brave and left-to-his-own-devices prince, then Bodrin, the funny, loyal and always-hungry best friend and Tournak, the kind and fatherly wizard, among others.

Needless to say I enjoyed reading this book, that is except for the names of people and places that are extremely difficult to pronounce.

Congratulations to C. Craig Coleman (@KiousFedra) on such a great book! Wish I could read the entire series.
Posted by kimmyschemy at Saturday, August 13, 2016