Princess Olivia, daughter of King Ryker of the Human Empire, was kidnapped by an Anti-Luck, a genetically engineered soldier. Only someone as powerful as a Fortunatus could save her and there were only two Fortunatus left; the king of the Mystics, who was at war with the Human Empire, and Drake Ashbell, a wanted criminal and half brother to Palace Guard Vahn Ashbell.

Drake found no reason to extend his assistance to the humans who annihilated his people. However, when the same Anti-Luck who kidnapped the princess took Angela, a girl he just rescued on her way to slavery, in exchange for his blood, Drake had to team up with Vahn in order to get the two girls back.

The book is fast-paced and action-packed with very interesting plot. It was complete with chasing and fighting scenes softened by a few brief romantic interludes between Drake and Angela. The writing style was easy to read and the dialogues were engaging and in the case of Drake, funny most of the time.

In addition to the great plot was a cast of memorable characters. Drake was an unlikely hero: arrogant and sarcastic. Despite his complacent facade was a dark and painful past making him the the most interesting character in the book. The most endearing, however, was Al, a wolf-like Mystic and the best Vhy-Rai healer, also Drake's best and only friend. Among other interesting characters were Titus, the Draco Hominis who would do anybody's bidding for the right amount of money and Olivia, the spirited princess and heir to the throne of the Human Empire.

It is, indeed, a well-written, highly entertaining and very enjoyable book and I recommend it all science fiction enthusiasts.

Congratulations to Daniel M. Quilter ( @dquilter6 ) for a wonderful book!
Posted by kimmyschemy at Saturday, March 26, 2016 No comments:

Time Stands Still is a beautiful story of love by Stacy Froumis.

Lauren and Stavros dated in college. Shortly after graduation, Stavros went back to Greece with his family but not before making a promise to Lauren that he would find a way for them to be together.

Except for a single phone call, Lauren did not hear from Stavros again, so she decided to place a call. Although it was met with indecipherable yelling in Greek, Lauren kept on calling for weeks. Finally, Stavros' sister, Athena answered the phone and told Lauren that Stavros was about to announce his engagement to Daphne, the girl their parents chose for him. Naturally, Lauren was devastated.

Eight years had passed. Lauren moved on and was now engaged to her high school classmate, Noah. A few months before the wedding, however, Lauren received a letter from Stavros. Then one day, Stavros, himself, came face-to-face with Lauren.

The story was fast-paced and was devoid of irrelevant details. It was concise and written in casual and conversational manner, hence, easy to read. The plot was interesting, intriguing and, somehow, unpredictable making the reader clueless about Lauren's choice.

The characters were relatable especially Lauren. She was torn between two men whom she both loved and for good reasons. She was a smart woman who was willing to do what she thought was right under the circumstances.

Moreover, the author adeptly described the beauty and charm of Greece. She added mystery to the plot by including a visit by Lauren to centuries old monasteries where she met a mystical elder whom she asked for advice.

All in all, it was a well-written and very enjoyable book. It was a story, though basically about love was also about life; the decisions a person makes, no matter how difficult it is and no matter how painful it will be for the people he loves. In the end, everything will fall into place because that is exactly where everything should be. As stated in my favorite excerpt from the book:

'There is no right decision or wrong decision. All decisions lead you to where God wants you to be.'

Congratulations to Stacy Froumis ( @StacyFroumis )  for such an amazing book! Looking forward to the next one.
Posted by kimmyschemy at Thursday, March 17, 2016 No comments: 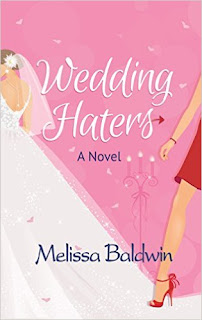 Wedding Haters is the second book of the Event to Remember Series written by Melissa Baldwin.

It was about Madie's upcoming wedding to Cole. With one of her best friends, Sienna, as the wedding planner, Madie was confident that her wedding would be one of the biggest events of the century.

Looking forward to tying the knots with Cole, Madie, however, was anxious about one thing, her family,  meaning her grandmother and her cousins, Ellie and Stephy. Madie loved her grandmother with all her heart and tried her best to please her, but ever since she was young her grandmother always took her cousins' sides, her cousins who seem to take pleasure in bullying Madie every chance they get. Much as Madie detest the idea of inviting them to the wedding, her grandmother was, apparently, expecting her to.

The story basically dealt with family and family issues, what one does and does not do for family. Moreover, it was also about standing up for oneself, for having the courage to say what needed to be said and do what needed to be done. My favorite excerpt from the book was:

Madie to Grandmother: 'I'm sorry that happened to them. But how is that my fault?'

What I like most about the book was the cast of lovable characters. The author created characters with distinct personalities. Abby was the understanding and nurturing one, that's why she became a teacher; Sienna was organized, thus, she was an event planner and of course, Madie was very creative, hence, she became a hairstylist and cookie designer. All three were smart and strong women who knew what they wanted in life.

Congratulations to Melissa Baldwin ( @mpbaldwinauthor ) for such a wonderful book!

Posted by kimmyschemy at Wednesday, March 16, 2016 No comments: 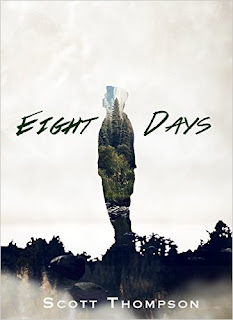 Eight Days is a touching story by Scott Thompson.

Clive Kinsella had always wanted to go places. He dreamed of finding a job in a bigger city. However, that dream was set aside when he met Annabelle. When they got married, the couple settled down in Georgetown where Clive lived most of his life.

The story began with Clive's death. At his funeral, Clive met his long dead grandfather, Pachu, who had come to guide him through his Reckoning which went on for eight days. During the Reckoning, Clive got to relive the most difficult times of his life and the most difficult decisions he had made.

The author masterfully wrote a book with interesting plot and memorable characters. The writing style was top rate making the book an easy read. The scenes were vividly described and the dialogues were engaging. The narratives were so heartfelt that I cried at some point in every chapter.

The book, though it started with death, was basically about life and the choices a person makes while he lives. It is a touching story of love, friendship, childhood, old age, life and death. The entire book was filled with food for thought and words of wisdom that would stay not only in the reader's mind but also in his heart.

This is truly one memorable book that will make the reader contemplate on his own life, his priorities and the decisions he could live with.

Congratulations to Scott Thompson (@sthompsonauthor) for such a wonderful book.

Posted by kimmyschemy at Monday, March 07, 2016 No comments: