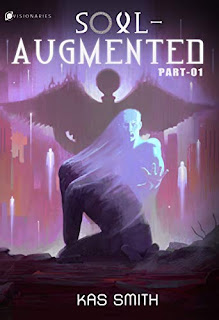 Soul Augmented is an interesting and thought-provoking cyberpunk and dystopian science fiction and the first in the Soul-Augmented Book Series created by Kas Smith.

Obsessed theoretical physicist Joshua Smith doesn’t realize just how much he loves his girlfriend, Savannah, until she falls into a coma following a spectacularly disastrous night. Savannah’s condition, however, is not unique. Around the world, millions of people fall into irreversible and inexplicable coma.

As Savannah lies unconsciously on her hospital bed, Joshua is racked with guilt for all the times he neglects her and chooses to spend his time and energy on his work instead of to her. Oblivious of the connection between the rise of natural disasters and the irreversible comas, Joshua vows to do everything he can to find a cure for her condition.

An unexpected visit from a representative of an extremely powerful secret society gives Joshua hope to save Savannah but he is yet to decide whether or not he is ready for the implications of his decisions.

Basically, this book has a common enough plot, a man who is so engrossed about his work that he forgets about everything else including the most important thing he has, the love of a great woman, until he lost it. What makes it exciting and interesting is the portrayal of a possible future of the planet. The rise of natural disasters, use of much, much improved and versatile mobile phone called in the book as genius control device, mode of transportation called octopede, and the ordinariness of augmented reality, everything that totally appeals to a science fiction enthusiast.

These same things, however, would deter other readers who prefer the usual and everyday things they see in their present reality. Having said that, I think it would be sensible to say that this book is great but only to a specific set of readers. May I also add that there are scientific terminologies that others would find unappealing like quantum teleportation and Higgs boson,

Being into quantum mechanics, I find this book very interesting that I plan to read the next book in the series very soon.

Congratulations to Kas Smith (@KasSmith_writer) on such a very interesting book. For more books by the author, click HERE.