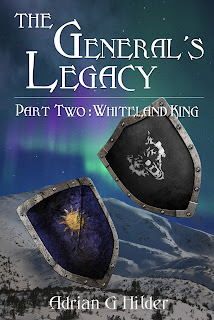 The battle for Valendo against Pragius and his undead army continues in The General’s Legacy, Part 2: The Whiteland King (The General of Valendo Book 2), written by Adrian G. Hilder.

Leaving his two mages to help defend Dendra Castle, the Archmage of Valendo takes his daughter Petra on a mission to Nearhon. With only thirty four men including the Silver Warrior , the Archmage and his daughter, and other members of the original Valendo unit, the young general, Prince Corylus, the grandson and protégé of the legendary general of Valendo, rode to Nearhon to face King Klonag, the Whiteland King. Unbeknownst to Prince Cory, his beloved Julia is King Klonag's visitor in Bytper Castle.

This is a fast-paced and action-filled fantasy book with a touch of humor and romance. It combines the wisdom and experience of the old and the tenacity and strength of the young as Prince Cory fights side by side with his grandfather’s old warriors and friends.

The writing is quite engaging with realistic descriptions of the beautiful, snow-covered Whiteland and amusing dialogues particularly between the veteran warriors. The story has a subtle touch of mystery as the author successfully hides a cunning spy in the midst of the assemblage.

In addition to a set of memorable characters, the plot is neatly tied up after a climactic and intense battle. It is followed by a satisfying ending but one that leaves the readers excited in anticipation for the next book in the series.

I just noticed, however, that Petra’s role was very minimal compared to her character description and backstories. I was expecting to see more from her than was actually in the book. Still, I enjoyed this book a lot and I recommend it to fans of fantasy novels. However, though I believe that this book can be read as a standalone, I strongly suggest to read book 1 first to fully enjoy book 2.

Congratulations to Adrian G. Hilder (@AdrianGHilder) on an amazing second book in a series. You may click HERE for more of the author’s books.
Posted by kimmyschemy at Sunday, February 12, 2017