Hello, everyone! I’ve got an exciting news for you. Mr. Marc Remus, the multi-talented author of the Magora Series, a delightful fantasy book series for children, just released a new book for young adult, The Language Thieves, and I got so lucky to be among the first to read it and feature it on this blog.

The Language Thieves features a group of teenagers investigating an elusive tribe that steals people’s languages. It is set in a small but seemingly charming Scottish island and just like his other books, it is so exciting and suspenseful.

In regards to that, Mr. Marc Remus granted me a Q & A that I’m so glad to share with you. Please read on and let us know more about this talented author together. 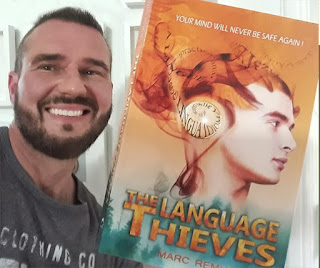 Q. Who is the greatest influence in your writing?

I can’t really say that I ever made a conscious decision to be influenced by someone. But of course, there are authors I like more than others. I am a big fan of Dr. Seuss and Michael Ende. I also enjoy old fairy tales from all over the world.

My children’s book series Magora was obviously influenced by the Harry Potter series. I started writing the series in the 90s. At that time Harry Potter was just starting. Even though I didn’t read this classic until ten years later, the hype in the media must have influenced my story. However, it was not a conscious decision and the similarities also vanished with the follow-up books.

Q. Do you have any celebratory ritual every time you finish a book?

I don’t really have a celebratory ritual when a book is finished because it is hard to say when a book is really completed. Once I have the book written it goes into editing. When the story has gone through a few rounds of structural changes with a professional editor it goes into the proofreading stage. When all this is completed then I have beta readers suggesting changes. So along the way there are constantly changes taking place. When the book is published and I receive the print copies I know that it is mostly finished. But even then, readers sometimes discover errors. Then I have to go back and change things for the next edition. But I do go out with some friends for drinks when I have the print copy in my hands.

Q. How long do you develop a character?

It really depends on the character. Some characters have developed in my mind for years, but never had the chance to be used in any of my books. So when I finally use them they are fully grown. Others are being developed as I write the book. Holly in the Magora series grew slowly over a period of 20 years while Daniel, in my latest book The Language Thieves, was developed in a year.

Yes, call me Mr. Outline. Some of my fellow authors and editors think I am overdoing it because I use outlines that can be 50 or more pages long. I write whole conversations in my outline before I start writing the first draft.

It is very time consuming but it saves me a lot of time later because I never have to delete entire chapters as some authors have to do. Once the outline is done 60% of the work is completed. Anything that follows I call “cosmetics” because I just beautify the language to make it accessible to the reader.

Q. Do you have a designated ‘writing spot’? If yes, where or what is it?

Not really! All I need is a quiet, peaceful environment without any people. Usually I work best in nature. I have written on a lake, a swimming pool, a river or a forest. I just need a laptop and paper and time for myself without any distractions. Unfortunately, these opportunities are rare today and so I really have to cut myself off from civilization if I want to get a new outline done.

Q. What is your ultimate dream as a book author?

I love movies, and I have studied acting for a while. So it would be a dream to see one of my books on the big screen.

Q. How do you come up with ideas for your books?

I always hear from readers that they can’t come up with ideas and that you need to have talent and inspiration to be creative. To a certain extent this is true, but you can do a lot to learn how to be creative. I usually don’t have a sudden flash of inspiration that enlightens me and pops out a book idea. I sit down and jot down some topics. Then I start asking myself “what if?” questions. From this I come up with many weird ideas. Then I sort through them and discard the ones that are useless. Once I have found one interesting idea I start asking more “what if?” questions. This narrows down the topics until I come up with one good idea.

Q. In your experience as a writer, is there such thing as ‘best time to sit down and write?

Yes, I believe there are good and bad times for writing. But this is very subjective. For me it doesn’t make sense to write if I am tired, stressed out, or have to meet deadlines. I don’t get very creative when I am pressured. I have to have all my chores completed before I start writing. Otherwise these to-do things will be in the back of my mind all the time. I need the full capacity of my brain to plan out a new story so everything else needs to be off my mind. But I know from fellow authors that some can only write when they are being pressured. Every author is different in this respect.

Q. Do you consider writing your own memoir in the future?

I have lived in Germany, California, Arizona, Florida, Honduras and Japan and have studied many subjects over the past 30 years; anything from painting and acting to Cultural Anthropology and Japanese. I visited over 1000 cities in over 60 countries, survived cancer and organized dozens of painting exhibitions. So I have been asked many times if I would write my memoirs because people consider my life to be quite interesting. However, I have to disappoint you. I have no plans to ever write my memoirs. Real life is not interesting enough for me to write about. I prefer to take readers away to fantasy worlds full of magic instead of keeping them rooted in real life.

That is why my next project is a children’s book that will take readers to a world full of chocolate and sweets.

Q. If ‘The Language Thieves’ is ever turned into a movie, who would you like to play Daniel, Connor, Jenny and Emily?

I think for young adult books it is very hard to pick someone for a movie. Any of the actors/actresses who are now young adults would be too old in a few years to play the roles of my characters. So I believe that new teenagers would have to be cast if the book ever became a movie. But I certainly would love to be part of that casting process and pick the actors/actresses. For adults it is a different story, and for the Magora series I had already set my mind on a few well-known actors/actresses. But for The Language Thieves I am not really set. However, I could see myself playing one of the language thieves, just like Hitchcock made short appearances in his own films.

There you have it, everyone!

Thank you so much Mr. Marc Remus (@MarcRemusArt) for taking the time to answer my questions. I enjoyed this Q & A a lot and I believe our readers enjoy it as much as I do.

You may check out the author’s books as featured on this blog: