What the Hand by Todd Stockwell 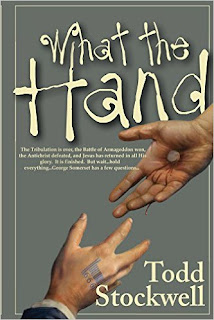 What the Hand is a novel about the end of the world written by Todd Stockwell.

The book is told in the first person perspective of George Somerset, a man who witnessed the end of the world and ended up in a shack on the outskirts of paradise.

George was a a divorcee who had an inclination to lying and other more evil acts. After having a serious talk with his co-worker, Charlie, George became aware of the signs that the end of the world was near, like earthquakes, floods, volcanic eruptions and wars. However, he was too lazy and too stupid to care. It was only after the Rapture, when good people as well as mentally challenged and children disappeared, that George finally believed what was written in the Bible.

He started to pack some food, weapons, books that would help him survive in the wilderness including a Bible. After employing the help of an old acquaintance to obtain false documents to let him out of the city, George made a run for it. He lived in caves, hunted animals and searched for edible plants in order to survive. He eventually found seven other people and he invited them to live with him.

This book is written in a conversational tone and is therefore easy to read. It told of the Rapture, Tribulation, Antichrist, New World Order and the New Kingdom. Other subjects include the Illuminati, Nephilim, giants, fallen angels, guardian angels and aliens. There are historical figures mentioned in the book like Adolf Hitler, Pres. John F. Kennedy, John Lennon and Abraham Lincoln.

Needless to say I enjoyed the book a lot. It is very informative, highly entertaining and downright amusing. This is one great book that makes the reader contemplate and reflect on his life, what he did with it and what he plans to do. It leads to a very important question, What will I do if the end, indeed, comes? Will I take the Mark of the Beast and suffer eternal damnation or proclaim my faith in God and die a painful death in the hands of the Antichrist?

The choice seem easy at this time, but as my favorite excerpt from the book stated:

'It wasn't a life full of constant miracles and daily enlightenment, but a hard road of self-discovery and inner change, often beset by difficult test of faith and most difficult of all, the tedium of devout living.'

Congratulations to Todd Stockwell on such a great book!

Email ThisBlogThis!Share to TwitterShare to FacebookShare to Pinterest
Labels: book review, Todd Stockwell, What the Hand