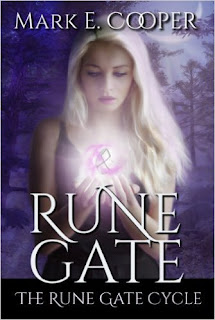 Rune Gate is the first book in the Rune Gate Cycle written by Mark E. Cooper.

The book features Alex Yorke, a police clairvoyant who is actually a witch. After an unfortunate incident, Alex withdrew to the peace and quiet of the farm she inherited from her grandfather. However, when her friend Deputy Jenn Hale asked her to check out a crime scene, she could not refuse and she discovered a rune on the body of the murdered victim. Not long after that, another body was found.

In the midst of the growing number of victims, Alex accidentally came across Douglas, a stranger who seem to be lost in place and time, but is somehow connected to the killings.

Though I initially dismissed this book as another witch story, I was completely surprised by an unexpected turn at Chapter 5. From then on, I could not put it down. I was totally intrigued. The arrival of the new and charming character makes the story even more interesting.

However, I was a little disappointed by the cliffhanger ending. Despite that, I enjoyed the book immensely and I am looking forward to reading Book 2, Chosen.

Congratulations to Mark E. Cooper (@mark_e_cooper) on such a great book!